"Oh, do not tell the Priest our plight,
Or he would call it a sin;
But--we have been out in the woods all night,
A-conjuring Summer in!
And we bring you news by word of mouth-
Good news for cattle and corn--
Now is the Sun come up from the South,
With Oak, and Ash, and Thorn!"
~Rudyard Kipling


What a magical time of year it is...In the Northern Hemisphere we come upon Beltane, the time when the God and Goddess are united, while in the Southern Hemisphere the veil is thinning at Samhain. The world is at opposites-the beginning of Summer in the North( although on our calendar it won't officially happen until June 21, the Solstice) and the end of the Summer in the Southernland. Throw in the Festival of Walpurgisnacht, and it's a wonderfully witchy weekend!
Walpurgisnacht/April30

Walpurgisnacht-Witches Night- is a combination of May Day with a touch of All Hallows Eve.The festival features bonfires, dancing and lots of drinking, with distinctive celebrations throughout Northern and Central Europe. According to German folklore, it's the night that witches fly to the Brocken, the highest peak of the Harz Mountains, to revel with the Devil.

If you look closely at the engraving to the left, you can see witches engaged in the usual broomstick flying,surrounded by black cats and bats-typical 'witchiness'- and the Horned One enveloped in glowing light, a phenomenon  known as the 'Brocken Spectre'. It's an optical illusion owing to the fact that he mountain is shrouded in mist and fog 300 days a year and is caused by the light rays bending in a spooky prism effect. The scene Night on Bald Mountain in Disney's classic movie Fantasia is actually a depiction of Walpurgisnacht, and not Hallowe'en as most assume. Most of the naughty witchiness takes place on the Hexentanplatz, a overlook on the Brocken, where it's said the witches dance the last night of Winter away. Today, the summit of the Brocken is home to a weather station and transmitting towers and is
(pun intended) just a ghost of it's mystical past.


Most Walpurgisnacht festivities outside of Germany have little to do with witches. It's the eve of the anniversary of the canonization of Walpurgia, a companion of St. Boniface. Enroute to join her friend on a mission trip, the ship that carried them was caught in a ferocious storm; prayers attributed to Walpurgia quieted the seas. Because of this, sailors consider St. Walpurgia as their patron to protect them in storms on the high seas. 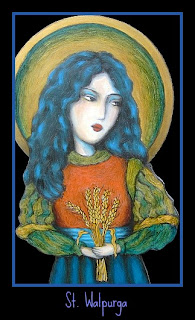 As with most Roman Catholic saints, Walpurgia is often pictured with symbols attributed to her ministry. Here she's pictured with a nimbus of light around her head to show her holiness, and a sheaf of grain. Scholars have noted that this means she was originally a local goddess, a protector of the grain, and in fact refer to her as Grain Mother. Records show that peasants fashioned her image into a corn dolly at harvest time and told stories where her spirit was present in a sheaf of grain. Other depictions of her holding a palm are erroneous, as she was not a martyr, but she is sometimes shown wearing a crown and holding an elaborate bottle, which may hold sea water. And for reasons I haven't been able to discover, she's also a protector against rabies...I wonder if rabies and ergot poisoning haven't some how been confused, because a quick trip to Merrick's Medical Dictionary confirm that the symptoms of the two are similar.

Those of us living in the Northern Hemisphere are about to celebrate Beltane ( Beltaine, Beltain), Bel being  a loose translation meaning Lord, as it is applied to many sun gods worshipped this time of year. It is God's Time, when the young God unites with the Goddess and brings fertility to the land and animals and prosperity to the people through the summer months of agricultural abundance. Beltane is traditionally the time of handfastings for that reason-either for a year and a day, or a more permanent marriage. It's a time of bonfire and merriment after the long Winter, a time to kick up our heals and celebrate. 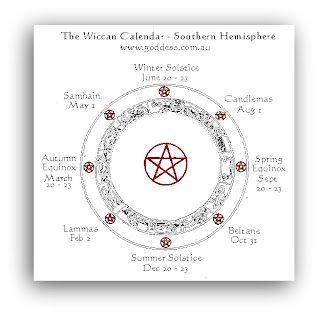 For those of us in the Southern Hemisphere ( what my Aussie friends call The Southernland), Summer is winding down and the harvest has begun...it's Samhain., and the veil to the other side is thin. It's time to connect with the ancestors, much the same as Pagans do here.

Unlike America, Hallowe'en is not a part of the Samhain celebration in the Southernland. In fact, Hallowe'en, being brought to the US by Irish and Scottish immigrants, is not a national holiday in Australia and surrounding areas in that part of the world, and for those who do keep the tradition, it is still held on October 31...on Beltane. Although growing in popularity among descendants of the Irish and Scots in that land, much of the tradition of Hallowe'en comes from Americans who have moved there.

That is not to say that Samhain down under is a solemn event- it is celebrated much as we do Beltane, with bonfires, dancing and drinking. It's not unusual to have fireworks and sparklers as part of the evenings entertainment.  Wreathes containing native  eucalyptus , rosemary spikes and leaves are hung on the door of homes to announce that the occupants are Pagans.

The Merry Month of May

My first assignment as a minister was at a cathedral which had a lovely, musty old library. Occasionally the librarian would cull the books, and I would johnny-on-the-spot to have first pick...not that anyone wanted the books I got anyway. One of my absolute favorites, which has turned out to be a genuine treasure is A Yearbook of Customs, written by Christine Chaundler ( now out of print). This little volume truly is a gem because it describes mostly very old and discontinued traditions in the British Isles. Although written only 50 plus years ago, the wealth of information on ancient holidays and contains charming engravings.

One of this quaint customs is called May Singing, when groups went around the countryside singing out the Winter. The singing went on for a few of the last days of April and had to be finished by May 1. Unlike Wasailing at Christmas time, the singers did not seek alms; the purpose of May Singing was to bring good helth and fortune to the inhabitans of the houses visited. Here are the verses of one song:


All in this pleasant evening, together come are we,
For the Summer springs forth so fresh,green and gay,
We tell you of the blossom and buds on every tree,
Drawing near to the merry month of May.
God bless this house and harbour, your riches and your store,
For the Summer springs so fresh, green and gay,
We hope the Lord will prosper you, both now and evermore,
Drawing near to the merry month of May.
May Day mirth is seeing a ressurection by those reluctant to see all the old traditions go by the way side. Once again people are getting up at dawn to gather flowers and wash their faces in dew, and making garlands and Maypoles. A old rhyme ( which sounds like a spell to me) says:
"The maiden who,
On the first of May,
Goes to the fields
At the break of day,
And washes in dew
From the hawthorn tree
Shall ever afterwards
Beautiful be."
Every house hung a bunch of greenery over the front door: this was the first thing done when the flower-gatherers returned fromt he fields. Afterwards, there would eb processions in the streets with people carrying staves decorated with flowers and decorated with cowslip balls.
I had no idea how to make a cowslip ball. I found this information on Botanical.com:
"The umbels are picked off close to the top of the main flowerstalk and about fifty to sixty are hung across a string which may be stretched for convenience between the backs of two chairs. The flowers are then pressed carefully together and the string tied tightly so as to collect them into a ball. Care must be taken to choose only such heads or umbels in which all the flowers are open, as otherwise the surface of the ball will be uneven."

Another charming event held during May Day festivities was the Chimney Sweeps Dance. The book gave no reason for it, but I suspect it's because one of the central characters was hidden inside a framework of flowers and called Jack-in-the Green. The other Sweeps clothing was trimmed in brightly colored strips of cloth ( flowers?). The group would dance around town banging their brushes and pans and being a general nuisance until someone threw them a few coins to go away. May Day was also occasion for fairs and other public gatherings where townspeople would get together to share a meal or hoist a pint or two to the bright prospect of warmer nights and longer, sunny days.