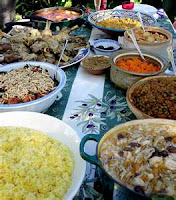 Talking about my faith is difficult; you'd think that with all the formal education, training and experience I have accumulated over the years in the field of ministry, and in the study of theology and comparative religions it would be a breeze. But it's not. At my very core I know what I believe and why: I feel it, it's ingrained in my soul and reflects my spirit. It's not easy defining something that doesn't stay static, that is ever evolving and shifting like a giant sand dune.

Our history as a movement and folklore have morphed into new paradigms over the last several decades as we literally and figuratively unearthed what has been buried and forgotten. There has been enough time lapse that our founders have lost their superhuman status through close personal scrutiny by the masses; they simply don't loom as large any more. Perhaps that is beneficial in establishing a healthy view of who they were then and are to us today. In other ways, demystifying them opens a space for the naysayers and doubters, and while at first that appears to be negative it can become the other side of the coin as well- we see in them more of ourselves. They become more human when we take them down off of crumbling pedestals and place them closer to us on newly poured foundations with more strength and accessibility. We reclaim them from the mountaintop and chip away the loftiness and romance encrusted by time to see them with new eyes.

This shifts the paradigm further, causing us to view ourselves differently. It forces us too take a good hard look at who we are in regard to the gods, and to each other. It is uncomfortable...but it is honest if done in the spirit of true self-discovery. The mask comes off-not because it has slipped-but because we have chosen to take it off. We loose our victim mentality when we choose to heal and move on, realizing that We, and not the ubiquitous They are the ones holding us back. When we recognize that infighting and petty nit-picking is the currency of failure and fools, we allow ourselves to rise to our birthright of co-creator with Immanent Divinity. We become, in a word, worthy.

Until we have an idea who we are and claim that without the smugness and superiority that has permeated our midst in the last few years,we will never be able to legitimately and credibly  able to explain the Craft to those out side it to dispel fear. And while I don't believe we need to strip away all the mystery from our religion that makes it sacred, I do believe we very much need to jettison the feeling of elitism around it in order to make ourselves understood.

We can begin by participating in rational dialog. Discussing religion is like everything else: it's a metaphorical pot luck dinner. Not everyone is going to like what is brought to the table, but if you take what you want from it, everyone gets fed. The human tendency to jump up and point a finger at the slightest provocation is neither Pagan, Christian, Jew or Muslim. It is a psychological characteristic of one who is angry and chooses to act and respond angrily. If we remember that type of anger is created by fear of the unknown in the other, we are able to temper ourselves when tempted to loose our cool. Pagans and Christians alike have been persecuted at the hands of the Other. It is not our providence alone to claim.

To dispel the myths and lies we and they have heard about one another, we must openly talk about what we have heard. We must be calm when discussing the Hollywood stereotypes. We must replace the misinformation with truth-ours and theirs- and accept that neither of us are right nor wrong. People have a tendency to accept, remember and assimilate new information by correlation to what they already think they know about any given subject, and religion is no different. What is going to be difficult in this is offering unbiased resources to back up our positions: sacred text may be taken by some to be the literal word of the gods, but is, in fact, made up of  myths and lore. That doesn't make them any less sacred, but it does beg to question who wrote it and their reasoning behind what they wrote. It may surprise you to know that many sacred texts have stories that echo one another. Use that commonality to your advantage when stating your beliefs. It fosters tolerance when we see a bit of someone else in our selves. It is perfectly right to compare your beliefs with theirs. Similarities give people something to connect to, and the shared values are an opportunity to bond.

You don't have to accept their views, and they don't have to accept yours. No one is trying to convert the other when engaged in authentic dialogue. Your truth is yours and theirs belongs to them. But everyone's truth is valid and equal, regardless. Every fine point will not be solved, but nothing will be accomplished if the conversation is never brought to the table. The best we can hope for is mutual tolerance-and peace.
Posted by AmethJera at 3:48 AM