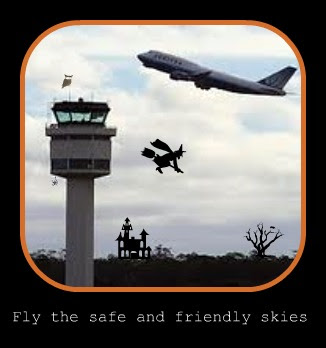 Imagine you are seated in the gallery of one of our lofty Halls of Justice in the Great Northeast. The Judge hearing the case has probably heard his share of suspicious and ridiculous accusations, so he is now the type to brooch no nonsense. Imagine the testimony of one of the defendants co-workers sounding like this:" The heater in my car quit working because it was hexed by a witch who was following me home from work."

Imagine the uproarious laughter in the courtroom as the Judge hammers his gavel in an attempt to regain decorum. But it's no laughing matter- not to Carole A. Smith, a former Transportation Safety Administration agent-and self professed Wiccan- who lost her job last year after allegedly being bullied by co-workers about her religion. You've seen the video and read the news articles by now. We've all pretty much come to the same conclusion that the major problem here is that Smith  pointed out dangerous safety issues being ignored by superiors( with whom she has a personality conflict) at the TSA, which clearly makes them guilty of placing the public at risk...and that the issue is being spun into something entirely different by representatives of a government agency entrusted with the protection and well-being of the public.

"She was in the top 10 percent in Albany at catching weapons on the X-ray machine. She passed her skills test on the first try. She caught a woman on her way to Vietnam with $30,000 in cash. And she didn't mind working with the passengers -- her training as a massage therapist kept her from being squeamish, as some officers were, about patting down elderly and special-needs passengers."~ quoted from a  MSNBC report.

Although the TSA did have a large file on her prior to the trial, even the judge pointed out that officials kept changing their stories and confusing the details. While it seems the TSA might have had good enough reason to terminate her employment in the end, according to the Judge's decision, the complaints came with suspicious circumstances.Those circumstances included the fact that her superiors allowed their professional judgement to be clouded by personal religious bigotry, as evidenced by the inclusion of a prejudicial statement referring to her practice of witchcraft.

I'm not questioning whether or not Carole Smith was a good or bad employee, but I am questioning why the TSA felt it was necessary to mention her religious preference in her termination letter. What difference did it make to the performance of her duties as a TSA agent?

She wasn't unrolling a prayer rug in the security area and facing East to pray, or setting up an altar with icons and candles. She wasn't lighting incense or reading tarot cards. From what I can tell, she wasn't even wearing a pentagram pendant on the job (unless it was concealed beneath her uniform shirt). There was nothing apparent in her behavior regarding her mundane employment to indicate if she were Wiccan, Muslim, Christian or Jew, although she had shared with a co-worker that she was a witch.

As much as I'd like to believe in my heart that the word witch isn't still loaded with  all sorts of assumptions- and that it's a positive and  accepted appellation - it isn't. Not even in my own Beloved Community, it seems. There is as much unwarranted criticism from those in the Craft as there is from the outsiders who lack any true knowledge of the meaning of our beliefs at their most basic. And that derision stems not just from those having a difficult time defining the word, but from those with a false sense of  'witchier -than-thou' superiority.


"She's no witch. She's living proof of how far people have strayed﻿ from the way of nature. If she were following her intuition, she would not﻿ apply for such a job &also would recognise that she does not belong there due to the harassment. A tunedin person would be glad to go. Get a nicer job lady & stop giving witches a dubious& confusing profile." -You Tube user comment posted after MSNBC video

In the video in question, Smith- an eclectic solitary- was seen walking around her home pointing out some of her prized Craft-related possessions, including a crystal ball of a size most of us would kill for, a pentagram wind chime, and a broom she brings attention to in a humorous manner (Come on, admit it: We all have at least one 'witchy' item in our collection we joke about. Mine is a dinky little iron cauldron.) She has three felines, and yes, one of them is a black tuxedo cat that she is photographed playing with and petting. How this brief video that does not discuss the specifics of her personal practice in depth earns her the ire of  a member of the self-appointed Witch Police and Craft Tradition Approval Bureau with a declaration of " She's living proof of how far people have strayed﻿ from the way of nature." is beyond credulity, as is the rest of the rambling rant about her choice of employment. How any of the footage provided  gives witches in general " a dubious and confusing profile" is also a bit of a mystery.

The upsetting part of this to me is that someone in the larger Pagan community has once again taken it upon themselves to define how the rest of us should practice our Craft and connect with the Divine while injecting a great deal of negativity and vitriol into the commentary...and that, friends, gives witches "a dubious and confusing profile" with the public.(Nevermind my favorite personal pet peeve with the Pagan community: If you're going to make a post attempting to show your superiority, knowledge and enlightenment on a subject, kindly focus on commenting in a manner that doesn't make you look like a fucking doofus.)

Continuing to send the mixed message of how well we treat one another with respect and dignity while allowing freedom to choose one's own path- but only if you do as I do and say and I approve of it, is far more damaging and damning than anything other religions say about Paganism and Witchcraft.
Posted by AmethJera at 12:34 AM