When One Is Killed, We All Die A Little

“There's an aspect of human nature in which we want to think we're better than somebody else. They're a different color. They speak a different language. They have a different name for the Creator. Whatever it is, that makes it okay for me to hate them, to try to get some of their land or some of their resources." 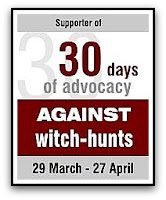 If you didn't already have a grasp of what transpires in the religious (specifically Pagan) community chances are you wouldn't be reading this blog right now. We all know there is a great deal of religious persecution going on in the world, from Muslim women being required to remove their burkas for post 911 'security' reasons, to the hysteria a couple of weeks ago over some orthodox Jewish men wearing tefillin (a set of small black boxes containing Biblical passages that are attached to leather straps),to the recent firing of a Transportation Security Administration agent whose termination letter made mention of her practice of Wicca.
Most notable in the media in the last few days, however, are the human rights abuses arising as a result of the the spread of superstitions and lies leading to accusations of perceived  'evil' and wrong doing in regard to witchcraft in Africa. Indigenous people-some children- practicing their spiritual heritage are being wantonly attacked by those driven by fear and ignorance. Cunning folk, root workers, herbalists, shamen,witches and other types of occult practitioners (and some with no affiliation to the occult at all) have been brutally murdered by their neighbors. In many cases the perpetrators are known to the victims and even include members of their families. Their crime is the misunderstanding of the practice of their religion.

A staggering number of those killed have been disenfranchised elderly women of the community-those living in  poverty and poor health, frail and unable to defend themselves against the judgment that seals their fate or those who take their lives.They are beaten, burned and hanged by hysterical, angry mobs- and those fearing the actions of someone they perceive as able to commit malicious acts  that are a threat to humans, animals or crops, much in the manner attributed to the witches and sorcerers in past times. The fear is fueled by some evangelical or fundamentalist Christians, those of opposing African occult traditions,political gain, or by those who are just out to take land and  what few possessions owned by them.Just because they can.

This injustice must not be tolerated. The attacks and murders are escalating daily, and more likely than not we are only hearing of the more sensational of them and not getting a true idea of the scope of this persecution until the authorities are held accountable. Please consider joining the Touchstone Advocacy of the Pagan Rights Alliance in it's campaign to make the South African Human Rights Commission aware that the world community aware of these travesties. A letter which you can download and send to the SAHRC will be available tomorrow, March 29th, on their website. In the meanwhile spread the news- be proactive. There are stories and information on the site to help you become educated and suggestions of what you can do  mundanely and magically as an individual.

Remember, these are our spiritual brothers and sisters and when one single witch is killed, we all die a little.

Go to the Touchstone Advocacy website:
http://www.paganrightsalliance.org/30_days.html
Posted by AmethJera at 2:04 AM