Saints Galore and Peppermint Patties, Too 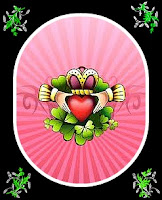 I'm Irish, Scot-Irish, Pennsylvania Dutch German and Italian; sorry but the Italians lost this one. I am fair-skinned, freckle-faced and red-haired, unlike my cousins who are Cajun French, Sicilian and olive skinned with dark wavy hair. I was raised by my Italian grandparents who took it upon themselves to get guardianship of baby me against their totally irresponsible daughter, and then systematically purge everything about the union of my parents out of my background...especially my father. Well, here I am, the spitting image of my father: chalk one up for Irish genes. The stubborn tenacity of the Irish is what has kept them from being eradicated from the face of the Earth for millennium. They have survived  nearly everything imaginable: soggy, cold weather and rocky barren soil; failed crops and resulting starvation,rotten potatoes, civil strife, immigration to less than desirable conditions,Sinead O' Connor, legendary myths of alcoholism...and the Church.Especially the Church: witness the new upsurge of Paganism in Ireland. No kidding. Irish Central has recently reported that despite it's best efforts and much to the chagrin of Christianity proper, approximately 60% of it's population adhering to any faith tradition is categorically identifying it's self as Pagan.

Meanwhile, it seems the whole world is gearing up to be Irish on March 17th,Saint Patrick's Day. Everyone loves a good party and prodigious amounts of flowing  alcohol. At least that's what they tell me. I wouldn't know-I'm of the occasional glass of wine variety. As much a blasphemy as I'm sure it will be considered, I'm not a beer drinker- can't stand the smell of it because it makes me nauseous. So don't even go there with me about green beer...

Or Saint Patrick. I have nothing against him personally, but I can't for the life of me understand why the one lousy day we get to hold our heads up and claim a bit of pride in our ancestry should be celebrated in the name of a Roman Catholic bishop who's aim it was to eradicate our history. There, I said it. Why can't we celebrate our historically diverse roots on Irish Heritage Day instead? 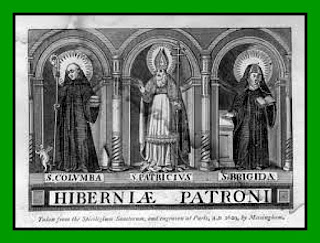 Saint Patrick is officially the  chief patron saint of Ireland. Although he's the most well known, he actually shares the honor  with Saints Columba and Brigid.

Surprisingly little is known about St. Patrick's history but these few facts: he was kidnapped from Britain around the age of 16 and taken to Ireland as a slave,working during his captivity  as a shepherd. Spending much of his time cold and hungry, he turned to prayer, which lead to his escape from slavery after being called in a dream by God.  Upon returning to Britain he studied in monasteries to enter the priesthood, where he was elevated as a bishop. In another dream he was commanded by God to convert his captors.He is single handily credited with converting many to Christianity. There are literally hundreds of unsubstantiated tales of Patrick's clerical abilities.One memorable story about him is that he  used the shamrock's three leaves on one stem to explain the Holy Trinity. Historians have been unable to validate this tale, but the shamrock still remains a symbol associated with Saint Patrick and Ireland. The most famous tale of all-how he drove the snakes out of Ireland has been thoroughly debunked by anthropology and science-serpents were unable to make the leap-literally-during the separation of the landmass that became Ireland.http://news.nationalgeographic.com/news/2008/03/080313-snakes-ireland.html It's been speculated that the 'snakes'  story stems from Patrick's successful ( though temporary, it seems) bid at squashing Druidism.Snakes are a popular icon in their tradition. The Other symbols associated with Ireland are the harp that mysteriously played through the halls of Tara  and the Fae, the fairy-folk, mostly know as leprechauns. 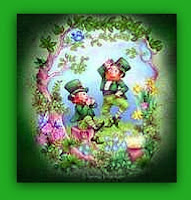 Leprechauns are often depicted as merry little people dancing around their burrows in pastures and leading humans to their pots of gold.They've also been portrayed as leading mortals to their own ruin; I suspect that like all relations of the Fae, they're not to be trifled with. Forget the Lucky Charms cereal thing. There has actually been a new law enacted recently protecting them in the British Isles.http://www.irishcentral.com/travel/Leprechauns-are-now-protected-under-new-European-law---SEE-VIDEOS-117791804.html

Friends who lived near Waterford in the 70's have related how St.Patrick's Day seemed to be an invention of the Irish living in America. At the time the day was only celebrated as a religious holiday and not with the revelry that it is today. In a strange twist of fate, the holiday has gone in the other direction across the Atlantic-from America to Ireland. There were no greeting cards with charming Victorian Irish children, leprechauns, shamrocks or harps on them, no shiny  green plastic beads, glitter deelie boppers or green beer. The only parades celebrating St. Patrick were when his effigy was carried to the local Catholic Church for veneration during the mass. How times have changed!


My favorite Irish custom on March 17th is making the traditional corned beef and cabbage with roasted carrots and potatoes, accompanied by soda bread and strong tea. You can thank the Jews in New York for the addition of corned beef to the menu, because the original meat was a rasher of bacon-inexpensive in Ireland when it was made on the farm, but a luxury in New York City where corned beef was much more common.  It's a lovely, filling meal and creates a link with my ancestors. I'm sure it wasn't a lavish meal for them however: a tough, cut of beef that has been preserved with salt and spices( corning) that requires boiling until it's palatable. I'm certain that's why they threw in the cabbage, potatoes and carrots into the pot; it helped to preserve the flavor of the meat because it had to be cooked all day. Modern cuts of corned beef still require simmering on the stove for nearly an hour per pound. If you choose to cook a brisket yourself, don't wash off the meat before adding it to the pot of water and add the contents of the spice packet or what you will get is a flaccid, bland piece of meat. Keep it below the water line while boiling, and add the root vegetables and quartered cabbage in the last hour. Pull the whole thing out and save the brine for soup stock-it's delicious. I arrange the meat, carrots, potatoes and cabbage in a roaster, then paint the vegetables with melted butter and glaze the meat with a mixture of honey mustard. Leave it in until it's browned and then slice the meat. Transfer it all to a serving platter for a meal fit for an Irish King. I usually make an assortment of shortbread, mint-frosted sugar cookies and peppermint cream candies for desert. The recipe I use for the candies is not a traditional butter cream center, but it's one that holds up well for the addition of mint extract and rolling to be either dipped in melted chocolate, or left plain and dusted in cinnamon to make 'Irish potatoes'http://www.cooks.com/rec/view/0,177,150186-252202,00.html And by the way, here's the recipe for real potato candy:http://www.cooks.com/rec/view/0,176,135181-254199,00.html.