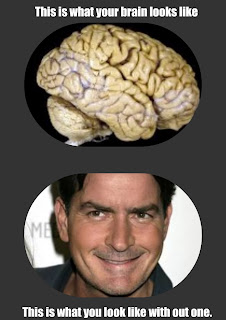 Watching actor Charlie Sheen immolate his career and personal life in the media has recently become a national pastime. I readily admit to the entertainment factor of this for myself and others,and confess that watching Charlie dousing himself in verbal gasoline and sending himself up in flames has  become one of my dirty little pleasures.

I find myself wondering daily what outrageous trespass he's committed, adding to his insane repartee...because watching Charlie in the spotlight is like a train wreck caught in the movie version of Ground Hog Day...it just keeps happening over and over and over. He's providing satirists and comedians with an endless supply of material because his behavior is to the point where credulity has flown out the window. His behavior is just too nuts not to love and he's such an easy target. It's getting uncomfortably embarrassing for everyone and yet Charlie's chimera is getting fatter by the minute because he's oblivious to his buffoonery.

In the realm of celebrity worship, people like Charlie Sheen-actors, rock stars, authors and politicians- are fed by the public and media until they hallucinate their self-importance.They become monstrosities rather than purveyors and vessels for art form. Admittedly, anyone wanting to go into this type of work has to have a little bit of ego and at least subtle narcissistic tendencies to develop the thick skin necessary to be in the public eye and continuously open to critical review. But the Charlies of the world have deluded themselves into thinking they are all that, and their eventual fall from grace is reminiscent of Icarus flying too close to the Sun. It's an uncomfortable fact that it's human nature to build up celebrities, then enjoy watching them falling off their pedestals. It allows us to breathe a collective sigh of relief that we didn't do that, didn't commit that type of  foolishness, didn't fall for the ego trap. We can point and laugh at others misfortune and stupidity.It makes us feel okay about ourselves and we are validated.

Charlie Sheen is both a drug addict and an alcoholic...not an "ex-drug addict" or a "cured alcoholic", and like those who join him in that little game, he is only fooling himself if he believes the lies whispered in his ear by the siren of addiction. Having been raised by individuals who should have been acquainted with  Bill W and participating in years of Al Anon meetings and therapy-as well as functioning as a professional counselor myself- I know that it is possible to recover, but there is no cure. The Beast is always hungry and waiting in the shadows, and the best course of action is not being in the way of temptation. I'm not saying that you need to be hyper-vigilant to the point of stressing yourself out, but being aware of what is always going to be there for you- even years down the road. There are a million and one triggers-and they're all pointed at you. It's wise to get out of the cross hairs while you can, because when the flaming arrow is shot at you, it hits those around you, too, and there are resulting fires everywhere. Other people get burned because of your emotional pyromania.

Charlie is the only one taking himself seriously these days...which makes me wonder if he's actually that far gone mentally, or this is the greatest publicity stunt ever pulled off? In other words, is Charlie Sheen a total lunatic, or has he managed to punk the entertainment business, media and the public?
Posted by AmethJera at 4:16 PM