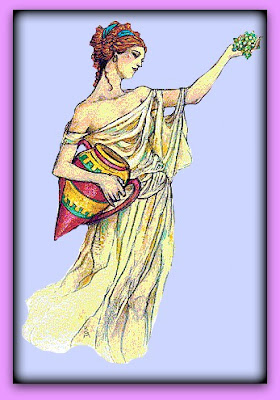 Lares are house spirits-the ancient Romans kept an altar next to the fireplace or near by for them. The altars appeared as little boxes or cabinets. They're confused with spice boxes in some photos, because they're located in the kitchen. Some Lare altars are combined with eternal household flames which are needed to be kept burning, lest the entire line of a family disappear. Many Lares were assigned specific duties; in addition to house Lares, there were garden Lares, kitchen Lares, etc. They were given appropriate offerings according to their duties-wine, milk, olive oil, water, herbs, honey, a pinch of wheat or flowers.

Our modern day version of the Lare is the Kitchen Witch, a charming little character which resembles the stereotypical Hallowe'en witch and protects the kitchen and cook from mishap. Some kitchen witches ride brooms and hang in corners or in windows; others sit patiently on counter tops or on shelves. Many primitive style kitchen witches resemble crones with head scarves and aprons instead of the tall conical hat. Some are little more than plain poppets with crude stitched faces and button eyes. Others are actually   talismans or little bags with either a witch figure sewn or painted on it, or some sort of magickal design made to hold a specific stone or herb. They do not require 'feeding' like a mojo bag, but their use is essentially the same.

Domestic Goddess that I am, I occasionally wander hungrily into the kitchen and accidentally invent something good out of leftovers or odd ingredients...although I will admit that I was thrown for a loop last night when all I found to go along as a vegetable with the stuffed pork chops I'd made were an old can of cranberry sauce and an open container of fish food. There is not a lot you can do with those.


This evening's offerings were different: half a can of  chunky tomato sauce, a left over chicken sausage , a couple tablespoons of cooked spinach and two  creamers of half and half.  The sausage was cut into bite sized pieces and combined with everything else and a dash of Parmesan cheese, then microwaved for two and a half minutes until heated through...it made a good 'on-the-run' soup. Paring that up with a green salad or a grilled cheese salad would make a healthy, filling meal in no time. You could vary the ingredients and cut the fat content by leaving out the half and half and cheese, or make it vegetarian by leaving out the sausage. The sausage could be left whole and eaten on the side in a slice of bread to accompany the soup...domestic engineering at it's best.


An easy dessert can be made from leftover ( and possibly stale) cake with some yogurt spooned on top. Yellow cake and lemon  yogurt make a very nice end to a meal. Chocolate cake can take a few spoons of strawberry or cherry yogurt to freshen it and make it something special. If there is frosting on the cake, I usually remove it before spooning over the yogurt.

Leftover over brewed coffee can easily become a coffee milkshake with the addition of a few scoops of ice cream, a splash of milk and a whirl in the blender. Put a dollop of maple syrup in the mix as it's being blended, and it takes the richness to the next level. No need to pout out 'old' coffee. Of course you can also make iced coffee with a splash of milk and a little something to sweeten it for a different kind of treat.


Everyone knows that stale cookies can be crushed and used to top ice cream or sprinkled on a frosted cake to make it special. Crumbled cookies or cake-separately or in combination- can be whipped with a couple of whole raw eggs, a bit of milk and a drop or two of vanilla flavoring, then baked in a greased pan to make "cottage pudding", which is essentially a variation on bread pudding. The crumbs ( along with some left over nuts or a handful of raisins or finely diced dried fruit) can be added to a custard mixture and baked until firm in a moderate oven. It's delicious recycling....and you can spoon some yogurt or ice cream over it.

Want a little something savory to spread on crackers or bread? Combine black and green olives and a clove of raw garlic with a little basil or oregano and a splash of olive oil in the blender until it's chunky smooth. Add some fire-roasted peppers, and/or some fried onion to the mix before blending, and it makes a wonderful tampanade far superior to any prepared jar version.

Speaking of garlic...have you ever had roasted garlic fresh from the oven? It makes a fabulous appetizer spread! Just chop the top off a whole bunch of garlic-no need to peel it, leave it in the papery skin, drizzle a little olive oil over the whole thing, and pop it into the oven until it's golden brown and soft. Pick off an individual clove and squeeze the fragrant paste out of the paper on to a cracker and eat as is, or squeeze the paste out of all the cloves into a small bowl and combine with a little olive oil and serve as a spread. It can be mixed with a bit of creamed cheese for a creamy version to use on bagels. Garlic takes on a mild taste when roasted.


Leftover boiled or baked potatoes? Chop them up in a bowl and toss with some Italian or vinaigrette dressing for a' light' potato salad...or chop them fine, add some milk and pre-cooked onion ( or roasted garlic or red pepper), heat through and season to taste for a healthy, easy potato soup.

Posted by AmethJera at 1:02 AM