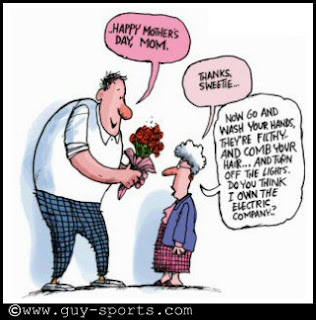 I have to admit that I have a problem getting warm and fuzzy over Mother's Day. It's the same lack of enthusiasm I have for Father's Day, Grandparent's Day, Secretary's Day and Valentine's Day and all other holidays that require me to have a sudden surge of sappiness wrapped in the guise of feigned appreciation for other people's loving role in my life.  I am all for giving Mom, Dad, Grandma, BettyLou and What's-His- Name kudos for their various contributions to my upbringing and well being. I am who I am partly because of them. It's the weeks-long campaign of guilt that surrounds these days that bother me because the end result is just the opposite: the recognition these people should be getting-and rightfully deserve- is cheapened by the demand for a particular level of 'love' by a merchant industry whose bottom line is making money off people's emotional attachments.

Yes, am trotting out the old saw about showing Mom a little love every day and not just on Mother's Day. And I will keep up this rallying cry as long as the Battle of Hallmark rages in society. I realize, just to be fair, that it isn't only Hallmark that has invented special days for us to celebrate in order for them to receive remuneration-they're just the convenient whipping boy because they are one of the most glaring offenders in this crime of passion. It seems that everyone else with a business license and a little PR savvy are equally to blame: Mom desperately needs a $ 3.99 card made from recycled paper, a box of chocolates laden with high-fructose corn syrup and toxic chemicals, and a bunch of over-priced flowers that are been hot-house grown out of their natural cycle and shipped cross country in an hideous vase painted by someone for 8 cents a day in a country that doesn't believe in fair trade. Clearly, this is the best way to show her you care.

Here's a piece of news: She isn't just your Mother on the second Sunday of May. She has participated in your childhood since the day you crossed the threshold of her house, so she deserves a few more props for her contribution toward your ultimate survival and being here today than the Big Three of Gift ideas. Okay, four if you include jewelry. 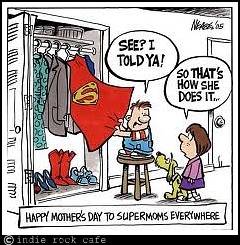 Giving her ten bucks for the gas she used in her car while  hauling you and your friends to the mall would be a a nice gesture, although it might cause her a sudden attack of apoplexy; if you're really into trying to kill her, do a load of laundry yourself when you come home to visit from college, " Hey, Mom, I'm taking you out for a burger right after I get back from picking up some Tide so I can run a load of laundry." Will guarantee to put her in her grave. Asking her if she has anything to throw in with your load will make her self-destruct before your eyes. Cleaning the house on your own initiative with out being threatened to be left on a constipated  Yeti's doorstep would also probably do it. As would anything else she's had to beg you to do. Ever.

From my own childhood, I realize that not all maternal figureheads deserve recognition for their biological contribution to your existence. My mother's sole contribution was popping me out after a tryst with my father-who was her third ex-husband at the time ( and later on, her fourth ex-husband...because that's what you did in the mid 1950's to preserve an air of decency.) Oh, that, and convincing my alcoholic grand parents that they needed to raise another child after they thought they were relieved of the responsibility of child-rearing because their own kids were old enough to live on their own. And no, I am not bitter- I just don't believe in sugar coating what everyone involved knew as the truth. It is what it is...and it's over. Moving along... 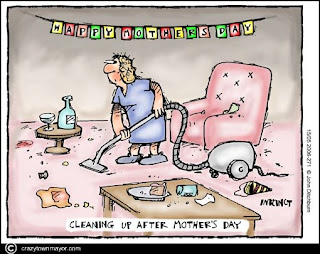 I don't have children of my own and I never married-both by choice. I had the opportunity for both and decided for my own personal reasons that my life would be less of a struggle without either one. That's not to say that I don't have kids- I have helped to raise literally dozens of other people's kids- through Scouting programs, day camp, church school and being a school teacher. I'd like to think I contributed to and participated in enriching their lives and expanding their horizons. I have diapered babies, tended to sick and injured kids, bought them school clothes, fed them, been there to listen and showed them their first butterfly. I have taught children (and adults) to read, to draw and paint, and drive a car. It has been my great joy to walk them down the isle or to officiate at their weddings and my greatest sorrow to have lost a few across the Veil and buried a couple. I have assisted in their socialization and taught them how to take care of others in emergencies...and I've taken a few home when their parents kicked them out of the house in anger, or were too drunk to care, or otherwise abused them. I have had pieces of  mustard-laden, previously masticated hot dog shoved up my nose, been puked on after a meal of Spaghetti-O's, and still have the carnation with the broken stem mistakenly given to me one Mother's Day during a worship service dried and stored in my scrapbook. Maybe I am a sap after all.

I didn't need to give birth to anyone to do any of the above, and they are my kids, none the less. When I occasionally hear from one of them, I'm thrilled. Once in a awhile I get taken out to a nice lunch to catch up.
I certainly didn't do it for the cards, the candy and the flowers. I'd rather have them come talk with me and tell me what they've done with their lives since we last saw one another. I want to know how they've contributed to making the world a better place, a more livable and viable place, and how they are passing the torch to the next generation...or where they have gone wrong, lost their way or flat out failed. They are still my kids, and if I can help them get it together, back on the path and continue their journey, I'm satisfied. If I can't...well, I appreciate knowing they cared enough to keep in touch. It's Mother's Day any day one of them shows up.

Let me add here that I am not the optimization of maternal nurture: I have learned from one of the best. Her name is Jean, and she was one of my Girl Scout leaders and is my Al-Anon sponsor.And she is my friend. She has taken me to meetings,church and helped me clean up a lot of the messes I've made in my lifetime. She has shared my joys, wiped my tears, gives me sought after advice when I ask for it, and kicks my ass when I don't but need it, even to this day. I an pretty sure she's sick of hearing about all the paltry trials and errors of what I laughingly refer to as my independent existence. She helps me stay connected to Life. Because that's what real mothers do: they connect you to Life and participate in living it along with you.

It is what the Great Mother does from within and outside of us... She gives Life. The Goddess grounds us and  comforts us when we need it; she celebrates our joys and shares our sorrows, manifesting in our being-everyday.

Posted by AmethJera at 3:50 PM