Encountering Others/Defending Your Faith As A Pagan 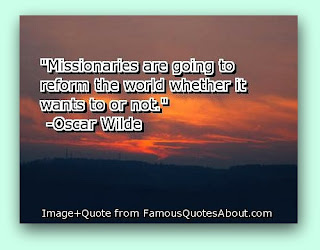 You're up to your elbows in laundry when there's a knock on the door; you know it's those pesky missionaries. Again. Weren't they just here a few days ago? They left a religious tract wedged in the door handle and a "Sorry We Missed You Card". By the way, there's no rule that says you have to answer the door-even if they see you. Feel free to dispense with etiquette-you didn't invite them over for tea.

This time, you weren't so quick to avoid them or were caught off guard- and they'rrrrrrre baaaaaaack. Only there's three of them now instead of two, and one of them already has his Bible out and is looking for scripture while you wipe your wet hands on the back of your jeans. Why don't they just give up and leave you alone? Because according to their faith, there is a little something called The Great Commission which appears in the Bible at  Matthew 28: 18-20. Christians believe these words are a direct order from Jesus Christ to go forth and make disciples:


18 Then Jesus came to them and said, “All authority in heaven and on earth has been given to me. 19 Therefore go and make disciples of all nations, baptizing them in the name of the Father and of the Son and of the Holy Spirit, 20 and teaching them to obey everything I have commanded you. And surely I am with you always, to the very end of the age.”

When you get direct orders from the Son of God, you go do it....because in this case your very life depends on it...and how you will fair in the next life as well. It's that little thing called fear that's been thrown into the mix that spurs you on.
I don't have a problem with someone sharing their faith. I do often have a problem with how they share it. Proselytizing is one thing...I can handle that. Most Christians take the Great Commission seriously-and they should. They're told to 'go and be fishers of men', the allegory being based upon a number of the original Apostles having been fishermen. 'Cast your nets upon the waters' Even those among us who aren't from a Judeo-Christian background have heard these admonitions. They are all about going out into the vast ocean of humanity and bringing back a prized catch...a new convert, a soul saved, another one to tend the net which is woven from the Gospel message. And the truth is that probably somewhere around 90% of all Christians are good-hearted, well meaning people very sincerely concerned for your welfare because they are just doing what they believe their God has instructed them to do. And a fair percentage of them are admittedly pretty meek about going about it.
Then, there are...THE EXCEPTIONS.

The Exceptions come in many shapes, forms and denominations. They are religious zealots, sent out to spread the Good News ( I'm trying not to get the visual of  casting fertilizer here, but it's difficult not to...). These are God's foot soldiers; there's a battle raging with the Devil for your soul, and time is short. Armageddon is right around the corner..maybe...they aren't sure. St. John was a little sketchy on the details when he wrote the Book of  Revelation. But it's coming...soon. Make no mistake, the Four Horsemen are galloping your way... and all these folks want to do is to make sure they don't gallop over you. Okay...so maybe they are trying to guilt you into joining their ranks. Hooray for our side! Another soul hard-won for Jesus! Here, sign this pledge card-quick-before the Lord takes away your 'Blessing'! Not everyone's motives are pure.

The Exceptions are the ones I have the least tolerance for and the biggest problem with, mainly because they're so over-the-top. It's not the evangelizing that bothers me; it's the Message. Because I have been a minister for a long time, and some of that time was spent as a Christian minister who instructed lay visitors on how to cast the nets, as it were, and I know the content of the  Message. So my bells and whistles go off when someone is posing de facto in the Name of Jesus- these folks have either lost their way or stepped off down a road Jesus never walked.


You can look a well-meaning Christian who is sharing the Gospel in a sincere way in the eye and say politely, " Thank you for your concern, but there are many sacred texts and the Bible is just one of them. The words of Jesus make him a great teacher, and I respect him for that, but I do not need saving,I do not believe in hell, and I am not Christian.Your God said that if we don't want to listen to his message, then to leave us alone, and that's what I'm asking you to do." ( Cite Matthew 10:14) Be friendly, firm and make eye contact...and stand your ground. This really does stop most of them dead in their tracks. It's a great way to let everyone off the hook, because frankly most of them don't like intruding in your affairs. Besides, there is this lovely little 'out' from the Book of  Acts that allows everyone to save face: "If any household  refuses to welcome you or listen to your message, shake its dust from your feet as you leave." It was clear that the Gospel should not be forced upon an unwilling people.

This is a symbolic act that signifies that all responsibility for the stubborn persons has ended. After all, you gave them their chance, and if they didn't listen, well...it's not your problem now. This is an adaptation of an ancient Jewish custom: shake the dust of the Gentile from your feet, so you will not become unclean. 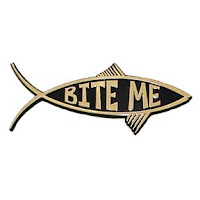 Notice it doesn't say keep yammering at the other party until they want to smite you with a rock. It doesn't say, "Keep talking until you wear them down." It most certainly does not say, " Get thou in their faces and scream that they are going to hell if they don't listen to you." No, indeed. In fact, the only thing they are required to tell you is what is loosely known as the "Good News"- that the Prophesy has been fulfilled and the Messiah has come. Period. All the rest is just stuff heaped in for good measure. It's called manipulation... and it's not the 'Word of God' by Christian standards. Rather, it is the will of the individual and not the 'will of God'-and you have every right to stand up and stand firmly against any type of verbal badgering. Oh, and FYI: repeated, relentless badgering falls under the category of verbal abuse.

No need to become emotional, and certainly the situation does not require rudeness. It may, however, require a bit of a show of backbone with especially persistent persons- or those in your own family. The very best advice I can give you is to ground and stay centered, and be firm. There is no need to qualify your feelings or justify your beliefs: it is simply so. The strongest, most effective weapon you can have in your spiritual arsenal are the words," That is not what I believe." You can say them quietly...in fact, being quiet and focused will do more to prove your point than any amount of vociferous shouting.


Most Pagans don't have the first idea on how to defend their faith without becoming defensive. Even the ones of us in worship groups seldom discuss how to talk to others about what they believe.So right here, right now, I'm going to teach you what I know about it.

First of all, arguing is unnecessary. Do start off by being-and staying-in control of the situation and you will have the upper hand. Make eye contact. This one single element will set the tone for the entire encounter. Do you know why practical advice tells you to never make eye contact with an aggressive dog? It's because the dog will respond to this in a physiological way: the animal will not back down. So, too, do humans...and since this is your turf, you get to be the alpha human. You don't have to lock eyes in defiance, but a keen, steady gaze will give the other person all the body language they need to know you will not be giving up the spiritual football. I have turned the tables on particularly insistent missionaries who wanted to pray with me by offering to lead the prayer myself- which delights them right up to where they realize I wasn't going to be manipulated. (Jesus, in fact, taught his followers to pray in a particular fashion for this very reason.) My favorite prayer begins something like, " Creator God, who has given us the will to individual sight, to freely choose how each of us see you through different eyes, be here with us now..."It's a nifty form of invocation which works every time because it's subtle.Notice how I didn't call on their God, yet didn't deny them their right to call upon him? I went on to establish that every individual has the right to call upon the Divine as it is framed for them, then called upon the god of my own understanding. You can be assertive without being aggressive, and a bit of diplomacy goes a long way. It also makes it clear that you have a well-defined understanding of your own beliefs and are confident about expression them. Even those who "put on the whole armor of God" can be disarmed in this way, because every suit of armor has a few chinks in it.

You have a right to be who you are, a right to believe as you wish, in or whom ever you choose. I believe that is our birthright as human beings. You get to do in a manner that benefits your spiritual progression, that makes room for your soul to stretch it's wings, without the interference of another. You can listen, if you choose, and you may want to because you will be the richer for the experience- but remember we all keep the faith in our own way.

Posted by AmethJera at 3:46 AM