Taken Up By The Raptor! 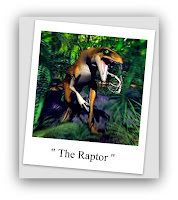 Maybe we misunderstood poor Harold Camping? Perhaps he wasn't talking about the Biblical Rapture at all!

Maybe what he actually said was." We will be taken up by the Raptor?" It could be that he was warning us of the return of the dinosaurs!

You know, those Raptors are sneaky critters...I saw Jurassic Park twice and read the book. I was so traumatized by that scene where the guy got chomped in half that I wouldn't use a johnny-on-the spot for years afterward.

Did you know that May is Velociraptor Awareness month? http://www.velociraptors.info/

The last we heard from Camping was a few days ago. Tom Evans, a spokesman for Family Radio Network said earlier today,“If it’s not going to happen then, it’s obviously not going to happen today,” Evans said, “and we were wrong.” He also said that Family Radio’s board will have to sit down for a serious meeting with Camping if today passes without signs of the Rapture. Which sounds to me like Mr.Camping just might be asked to either retire permanently from the organization he founded, or at least be asked not make any more predictions to avoid any further embarrassment. I believe either would be a good solution right now, because Family Radio is in some pretty deep  poo-poo with pretty much all of it's supporters-especially the ones who spent their personal life savings on billboards and media advertising to get the word out. Even as a long shot and a risky investment, they still would have liked to have seen some sort of return, like, oh, say...being among the Chosen of God as promised per Camping's twisted testimonial of faith.

Belief and faith are always a risky proposal.  Belief is one of the most basic building blocks of  conscious thought. And it's one of the most controversial subjects up for discussion, so what I'm  positing here is a simplified version of my experience of what belief is. I espouse  the theory of Belief being broken into core beliefs-that which is directly experiential to a particular individual-and depositional beliefs- which are essentially belonging to the collective unconscious. Core beliefs stem from your own experience, while depositional belief exists yet was never consciously considered by the individual in the here and now. Things  experienced exist in actuality and are tangible. That of the collective unconscious are from the realm of general thought that has been accepted by the obliqueness of the universal  "they". That is, you know what "they say" about something, even if you've never actually given the subject any deep thought.

This is where many cult leaders gain their power, because most people are aware of the generalities and take them for granted- yet for the most part those 'pearls of wisdom' are unexamined. This is where it's possible to make a tweak here or there until what is common knowledge is bent to suit the cult leader's agenda.(Hence the admonition in the Bible to not change the Word one jot or tittle.) Bend what is common knowledge, and a whole new way of thinking emerges which influences and changes the outcome...and this is exactly what Harold Camper has accomplished with his supporters and listeners on Family Radio. What Camping preaches is not just a whole different take on basic Christian beliefs, but a whole new set of beliefs to which he commands of his followers to be obedient.

Faith is a confident trust in that which has not yet become tangible. Faith in a theological context requires trust in a belief system, the teachings of another, or some other form of transcendent reality. The cult leader's followers trust him/her because they have faith in his/her teachings. This is coupled in with a form of celebrity worship, or to get closer to the Biblical version, idolatry. The celebrity worship aspect builds the targeted individual up into something we envision as enviable acceptance or perfection within the group. Suddenly that individual comes to be representative of what his/her followers believe to be most consisting of deity-they become god-like. False gods are built from  the  projected psyche of a group everyday; that's why there are so many varieties of cults. Many times all it takes are the buzz words those with wounded psyches are searching for-love, acceptance, healing, prosperity....or a promise of being among the God's Elect. 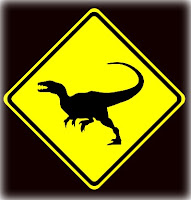 While I personally think that preying on the faith of gullible individuals should be a punishable crime when it  concerns religion, it is not. It is certainly a moral and ethical crime with all the connotations of what we  commonly define as sin. There is still a part of me that wants to stand up and scream at Camping's victims,   "Just what the hell were you thinking?!", but I need to back off and consider the fragility of human nature. They had faith in him because they needed to believe in something, and they saw the answer to that in his message, they saw it in his patriarchal image and heard it in his soothing tones. He is believable because, as psychologists are wont to say, you can check off all the boxes when you look at him. He fits the image of the wise and sagely Elder, period.

He also fits the image of the wily and predatory Raptor, always on the hunt for the next opportunistic meal. Sadly, there are still others of his species that exist waiting to catch the next wounded soul who walks by. Beware, they can smell the blood of their prey.

And if you think this just applies to Christians, you are very wrong, my friends, because people of faith-regardless of  what they call their spiritual path-are vulnerable prey for these monsters. The Raptors are in every faith tradition- and they are impartial to whom they consume.

Posted by AmethJera at 2:47 AM