"Nothing in the world is more dangerous than sincere ignorance and conscientious stupidity." ~Martin Luther King, Jr.

I was musing with my housemate on Saturday night after the appointed time for the Rapture had passed  about what Harold Camping would have to say come Monday. I even joked that he would tell the public that the Rapture had in fact occurred, but that it was invisible to the eye of those who were not among the Chosen because God didn't want all those naked bodies floating around.

Camping emerged sometime Sunday evening, from his self-imposed exile in a local motel, saying he was "flabbergasted' that his prediction had not occurred. The expected backpedaling was as transparent as any bald-faced lie I've ever read. I cannot imagine someone as innocently clueless as Camping is portrayed. That he actually thinks the public is so stupid as to buy into his, " I don't know what went wrong" excuse is infuriating to me.

"We've always said October 21 was the day," Camping said during his show. "The only thing we didn't understand was the spirituality of May 21. We're seeing this as a spiritual thing happening rather than a physical thing happening. The timing, the structure, the proofs, none of that has changed at all."
http://religion.blogs.cnn.com/2011/05/23/doomsday-leader-flabbergasted-that-the-end-didnt-arrive/

"Seeing it as a spiritual thing"... meaning that it was invisible. WOW. Maybe I should make the next prediction for the Rapture. So far I've been more accurate than Camping, and I'm not even a Christian! Saying that he 'didn't understand the spirituality' of a particular date is just so much silly double-speak that I can't wrap my mind around it. New Age psychobabble has to go some to even come close to that statement. And I'm not laughing at the absurdity of his statement because I really just want to slap the stupid out of him.

Scoffing at Camping has become a national past time, evidenced by the traffic on popular social networking sites including Twitter and Facebook. Rapture jokes are bountiful. Bloggers- like yours truly -have been covering the event for nearly a week with varied perception and insight. The major news services have been having the proverbial field day. More than a few of my Christian friends-none associated with the Camping group- are embarrassed, incredulous and angry about the whole thing because their faith tradition has been laid wide open for scrutiny . They are appalled that the general Christian population has been subjected to ridicule because of the foolishness and arrogance of  a single individual. Even those in his own camp have taken the elderly preacher to task.


"I thought he would show some more human decency in admitting he made a mistake," he said. "We didn't really see that." said Josh Ocasion, teleprompter operator for Camping's Family Radio show Open Forum.
Other employees have been equally as blase about their CEO's "guaranteed" prediction,"I don't believe in any of this stuff that's going on, and I plan on being here next week," a receptionist at their Oakland headquarters told CNNMoney.http://money.cnn.com/2011/05/19/news/economy/may-21-end-of-the-world-finances-harold-camping/index.htm

Oh ye of little faith? Hardly. The Biblical Numerologist  wrote a 'Farewell Message' to his associates which was posted as a link to CNN's online financial page last week. In it he encourages them to "occupy" until the return of the Lord, and to "steadfastly continue to spread the Gospel" as he bade them farewell. In other words, what he was telling his own staff at Family Radio was that they would not be among the Chosen...but Camping himself was. Hasta la vista, baby! It's been nice knowing you, but God told me you are unworthy of that heavenly crown you were promised. http://money.cnn.com/news/economy/storysupplement/harold_camping/?iid=E

Tim LaHaye, co-author of the best-selling "Left Behind" novels about the Rapture, recently called Camping's prediction "not only bizarre but 100 percent wrong!" He cited the Bible verse Matthew 24:36, "but about that day or hour no one knows" except God.  LaHaye, himself an apocryphal evangelist who doesn't see eye to eye with the mainstream religions, dismisses Camping as a false prophet. 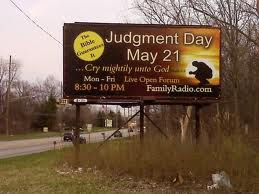 I can get beyond Camping being wrong, his followers casting a weary eye at him, and his religious peers pointing out that he's more than a little off center, but what I cannot let go of is the fact that Camping has been so cavalier, and divisive about his devotees following his admonition about not needing anything of  material possession in this world because the are definitely guaranteed that they will be swept away to the Great Beyond- No worries, Mate. His detachment in that regard is nothing short of astounding to me since he's worked so hard to cultivate the image of the kindly Patriarch leading his flock.. His heartless reply to  reporters about the fate of those who off-loaded their lives because they thought they would soon be traveling light with the Lord was that he never told anyone to give everything away- and that he intended to hang on to his possessions and lifestyle until the bitter end. It sounded very uncomfortably to me like he's saying," Screw 'em for being fools." What I also am having a very huge problem with is that his End Time Prophesy has been so detailed and hopeless that it inspired a terrified California woman named Lyn Benedetto to force her daughters to lie on a bed while she cut their throats and then her own with a box cutter. Thankfully the three survived, but an elderly man in Taiwan fearful of the Rapture as described by Camping threw himself off a building to his death, and another died while attempting to attach himself to a wooden cross with an electric drill. There were other unconfirmed reports of doomsday-related suicides around the world as well. I suspect there is a reason the Bible is vague on the details of Armageddon, and that is so folks aren't driven to suicide by thoughts of anguish, although as a Pagan, I can't fathom why a loving, forgiving God would even entertain the thought of putting  the creatures he created in His likeness through the kind of tortures described in the Book of Revelation. If you think that questioning the actions of the Almighty is blasphemy, you are certainly entitled, but I'm still going to bring up the subject with Him. And no, I don't think I'm going to hell for asking; not because I don't personally believe there is a  hell, but because I don't think the Creator gave us free will and then punishes us for using it. What kind of a warped God does that?

Harold camping fails to see his part in these acts of desperation; he refuses to acknowledge that his twisted interpretation of the Gospel had anything to do with it at all, and he has even gone so far in his madness to up the ante by now saying that there is no hope for redemption and the entire world is doomed to incinerate on October 21st. While he is calling for unwavering obedience to his version of the words of God from his followers, he is at the same time telling those same people that God has judged and rejected them-despite what the Bible says about last minute conversion. Harold Camping has told his followers that the only thing left now is for them to wait for the end and die! Which sounds suspiciously to me like an invitation   to break out the poisoned Kool Aid.

Posted by AmethJera at 4:20 AM