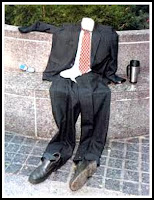 So...Harold Camping says that by 6 p.m. Saturday night The Rapture will take place and all those who are favored by his version of God will be taken up to live in heavenly glory- sucked right out of their clothing sort of the same way aliens suck you out of your car on a deserted country road at midnight.
( If you are unsure of your status as one of the Elect, your first clue would be that you are suddenly, inexplicably naked. However, if there is an Elvis impersonator present and there are lots of colored lights you are probably in a bordello in Vegas. That, or you really are aboard the Mother Ship from Close Encounters of the First Kind.)

Mr. Camping says the surest sign we'll know The Rapture is happening will be because there will be a catastrophic earthquake...somewhere... presently undisclosed. He wasn't real keen on that detail. Well you know what? I'll wager there will be an earthquake somewhere on Saturday, because if you've managed to get through fifth-grade geography, you've learned that the earth's tectonic plates are in constant motion. Old Harold may not realize that he's a master of stating the obvious. Or maybe he's learned to use the obvious to his advantage. 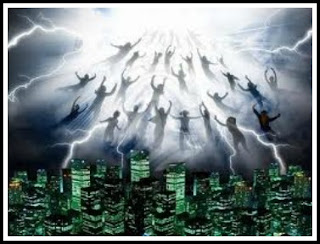 Actually, I started out writing this blog installation to let you know exactly where The Rapture was going to begin, but I'm not as good at calculation as Mr.Camping. I couldn't decide if I should start at the International Date Line, or to use Greenwich Mean Time. Of course, the scientific community has now changed the designation from GMT to Coordinated Universal Time (CUT) or Universal Mean Time (UMT) or just plain Universal Time, so not all maps have the same information and a few haven't been updated to reflect the new name...and none of the systems in use recognize Daylight Savings Time. I'm also uncertain whether to use the Gregorian, Julian or Ancient Hebrew Calendar, which would throw things off by a few days. This predicting the end of the world stuff is certainly confusing business that requires the input of someone who has been studying the subject for the last half century, like say, Harold Camping...no wonder he's always publishing the wrong date!

I thought it might be fun to put together a list of all the things  I wanted  to do before Saturday. At the onset I realized this was going to be a long list, and since there isn't much time left, I would need to cull some of my more superfluous desires...like tea with Elizabeth II ( I've already had dinner at the White House, thanks). Speaking of  the culinary realm, I'd settle for a nice juicy cut of prime rib, cooked just enough so it couldn't be used by the Red Cross as a blood donor, with the edges of  visible fat seared to crispy and a nice serving of  Red Bliss potato salad on the side. Placido Domingo recreating the lead role from Cyrano de Bergerac would be a marvelous accompaniment to such a meal-that is, if he's into dinner theater and if he's not got a better gig that night, say, with the Heavenly Chorus. Otherwise I'd default to a medley of  current Broadway show tunes sung by the original casts, followed by a margarita at the Woody Creek Tavern in Aspen, Colorado and a slice of chocolate raspberry tort from Cheesecake Factory. While I'm putting my order in  for entertainment   prior to the Great Final Exit, I'd like it to include a nice, long herbal bath in an underground hot spring located in a crystal grotto while being attended by a couple of  hunky Chippendale dancers dressed in skimpy togas, eager to give me a salt rub afterward and followed by a lap dance by Rick Springfield. This is my last day on Earth, and damn it all, if I gotta go... I'm doing it my way, to quote Ole Blue Eyes. There will be plenty of other people lighting candles and getting down on their knees without my help, so since I only have one shot at this and it's my final night before the celestial blastoff, I'm going to be selfish. So there. I'm not going to add to the wailing and gnashing of teeth.

So what's a good Pagan girl like me going to do? Well, at 6:01 p.m. while I'm sipping a nice cappuccino with just a hint of orange, I'm going to resist the temptation to join in the laughter. I will not gleefully rejoice in the gullibility and naivete of Camping's followers because I understand we are all looking for something to make our lives better...I'm not sure I can bring myself to the level of unfeeling to say that they brought misery to themselves through outright stupidity. There's a point where a situation like this ceases to be amusing and becomes sobering,then pathetically morbid. And I might light a candle after all, because there are going to be a lot of broken spirits in our world who will be reflecting on their folly and asking themselves how they could have been so foolish. After all, they gave away the things they spent a lifetime in amassing- financial stability, possessions that made their lives comfortable and helped to give it meaning, and maybe even their family ties to follow a delusional, egotistical lunatic like Harold Camping. While on the other hand-and I guarantee this-Harold Camping will have lost nothing and perhaps suffered little more than the shine off his already tarnished halo. He will go back to the study in  his luxurious home and will work on spinning a tale about how The Rapture didn't happen because of a quirk in the calculation, or the calendar he used was wrong, and in the end, when he is through weaving a web of confusion and Biblical doublespeak it will all be someone elses fault.. Once again he will shirk responsibility for the chaos and havoc his inflated sense of self esteem has caused good people who put their misplaced faith in him. No amount of self depreciation and psychobabble spouted on his radio broadcast soapbox Open Forum in the  days following May 21 will be able to justify what his arrogant interpretation of the Bible has wrought, because no one truly understands the mind of God...not even Harold Camping... who should  be reminded of the words. " No one shall know the hour or the day..."

Frankly, I hope those words haunt him for the remaining short time he has left on earth for what he has wrought through the misuse of scripture and the betrayal of the people who trusted in him instead of God. When the time finally does come for him to really come face to face with his destiny, I would not for love nor  all the riches of the world want to be Harold Camping.

Posted by AmethJera at 6:02 AM